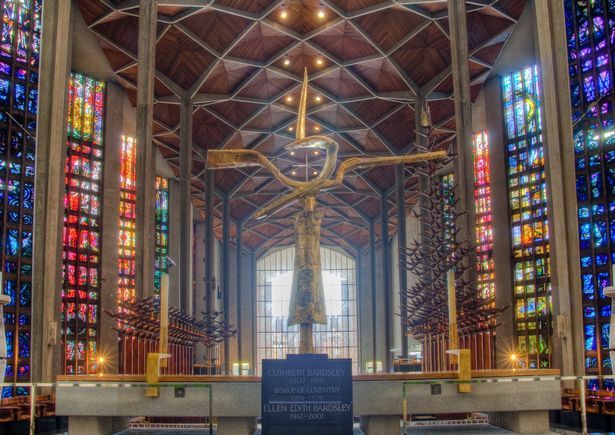 It would make a good question for Pointless! Name the famous artists associated with Coventry Cathedral. Sutherland and Epstein would probably score 80 closely followed by Piper and perhaps a bit lower for Hutton. But how many would Geoffrey Clarke score? Would it be a pointless answer? How many Coventry people have even heard of Geoffrey Clarke?

But Geoffrey Clarke is far from pointless! Arguably he is the most prolific artist associated with the Cathedral. He was one of the most powerful and innovative British artists of the last century. He is mostly known as a sculptor, ever open to the challenges of new materials. But study of his huge output reveals wonderful and imaginative works in stained glass, enamel, mosaic, as a medal-maker and on paper: watercolours, drawings and many prints, mono-types being a favourite medium.

Work on the new cathedral began in 1956. The architect, Basil Spence, had given the commission for making 10 stained glass windows for the nave to the Royal College of Art (RCA) in 1952. The Head of Stained Glass at the RCA, Lawrence Lee, had overseen a new progressive phase in the department and encouraged students to experiment with contemporary materials and concepts. He divided the commission between three artists, himself, and two of his recent students, Geoffrey Clarke and Keith New. Each would do three windows and the tenth was to be a collaborative efforts. Other students at the college would help and support the initiative.

The Coventry commission lasted five years from design to completion; revealing, on installation, a coloured progression from childhood to the wisdom of maturity, with one side assigned to God and the other to Man. The stained glass windows are 25m-high and rise from floor-to-ceiling. The windows which Clarke made are – Wisdom of Man, Wisdom of God and Man in Maturity. Two of the windows were purple and the other was multi-coloured.

For Clarke this led to other stained glass commissions, such as the west window at All Saints Church, Stretford, and other churches in the Manchester area, and four Treasury Windows for Lincoln Cathedral.

But it wasn’t just these three windows that Clarke was responsible for. He also designed the 26m high flèche, or hollow spire, on top of the Cathedral roof. This was known as the flying cross, and had to be lowered onto the Cathedral roof by a RAF helicopter. 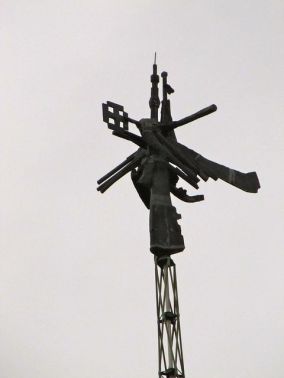 Two other pieces by were the High Altar Cross and the suspended crown of thorns and he also designed candlesticks for the Altar.

Geoffrey Clarke was also responsible for the cross and candlesticks for the Undercroft Chapel of the Cross. After the Second World War, the congregation had been worshiping in a small crypt chapel under the Ruins. From January 1959 until the completion of the new Cathedral in 1962, services were transferred to the Chapel of the Cross, a larger temporary chapel in the recently-completed Undercroft. The architect, Sir Basil Spence, invited Geoffrey Clarke to create a cross and candlesticks for the altar. The result was spectacular. The giant cross, over 2.3 metres tall and suspended on wires in front of a gold curtain, was fabricated from narrow strips of nickel-bronze, radiating out from the form of a Latin cross and inset with pieces of crystal, lit-up from within by their own integral lighting system. This cross now hangs on the basement wall of the Cathedral by the Chapter house. 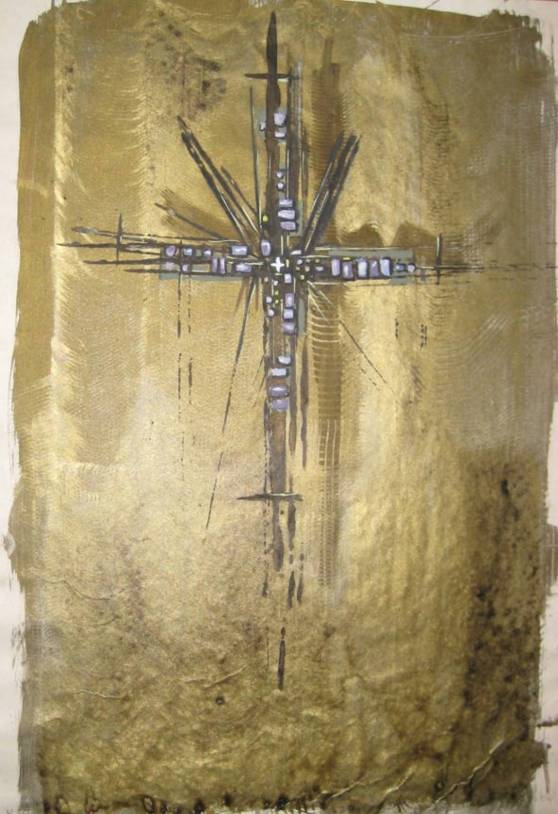 Clarke pioneered a modern variation of the ‘lost wax’ method using shaped polystyrene moulds set in sand, which vaporised upon the casting of molten aluminium, a metal increasingly favoured by a number of post-war sculptors.

Clarke continued over several decades to employ aluminium for some of his finest reliefs and free-standing pieces. The first of the latter was in 1961 for Sir Basil Spence’s house at Beaulieu in Hampshire.

In 1962, the year that the Cathedral opened, Clarke was working on a 10 metre tall sculpture called ‘Spiral Nebula’ for Spence which is located outside the Herschel Building, Department of Physics, at Newcastle University. The sculpture’s title particularly brings to mind the growing interest in space amongst physicists; Britain’s first satellite, Ariel 1, was launched in 1962. This large, bold sculpture, whose modern appearance, like an abstract receiving dish, electrical coil, and antenna, the use of textured and pegged aluminium panels, a handcrafted quality and a humanity to this man-made structure apparently communing with outer space. ‘Spiral Nebula’ was created in polished steel to adorn the exterior of the building but Basil Spence felt it would detract from his architecture so asked for the piece to be painted a dull grey and sited at ground level in front. 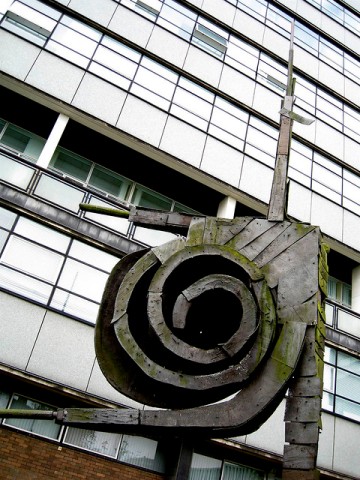 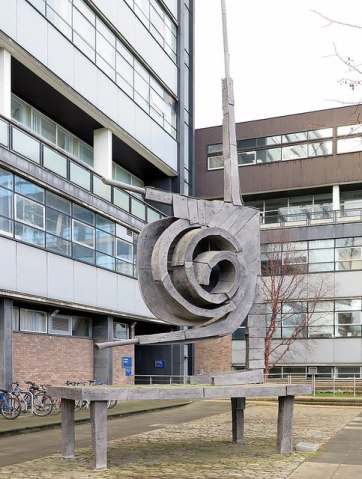 After Coventry Clarke won many major commissions including Candles and altars for Chichester Cathedral; 30 relief panels for the Canberra liner; doors for two London banks; a light fitting for a bank in Liverpool; a mosaic for Liverpool University; a tapestry design for a sheikh’s palace in Kuwait; aluminium reliefs for two Cambridge colleges; screens for the Royal Military Chapel, Birdcage Walk; and a relief sculpture for the new Nottingham theatre.

Geoffrey Clarke died aged 89 in 2014. Perhaps he should be better known in Coventry?