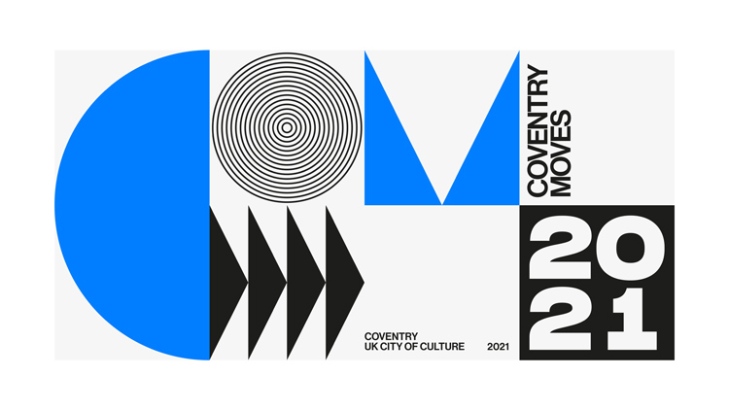 We’re still some 10 months away from the start of Coventry’s year as UK City of Culture in May 2021. Last week saw a major step towards this date, with the launch of the Coventry City of Culture brand and website.

The brand is launched in a punchy one – minute video,  which touches on key themes from the city’s past, and looks ahead to the city’s future. The video is clearly targeted at a young audience, picking up on the fact that in terms of population, Coventry is one of the country’s youngest cities.

Visually the brand is strong and distinctive. A striking blue, “Moving Blue” is the feature colour – harking back to Coventry blue of medieval times , and the Sky Blue of more recent years. The blue is complemented by the black and White of Two Tone. The graphics are crisp, clear and modern and the total effect is very Coventry, very distinctive very effective. 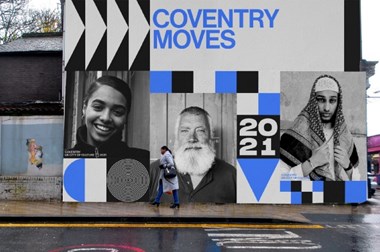 The branding strapline “Coventry Moves” is intended to reflect the fact that Coventry has always been a city of change, also picking up the linkages to Coventry’s central role in the motor industry over the last century. This has taken me longer to get my head around. It is so difficult to come up with a strapline that isn’t a cliché and hasn’t been used before. So “Coventry Moves” it is. My problem has been that every time I see “Coventry Moves”, I keep on asking myself, “where to ?” However, it is what it is and it’s growing on me.

The website provides a wealth of information about what the team at City of Culture is trying to achieve and a wealth of information about the team itself – a markedly bigger team than I’d envisaged. The structure of the team helps one to get an idea of where the focus of their work is and of the way that the team is seeking to engage with the city’s diverse communities. As you would expect, at this stage the website is strong on ambition and limited in detail about how the ambition will be delivered. But that is a key part of the challenge for the next ten months or so. 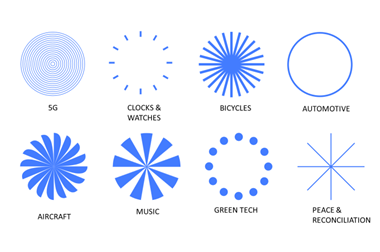 This is very much an early step in moving towards May 2021. One of the other challenges to be overcome is how the City of Culture concept, developed in the old world pre – Coronavirus will evolve into a concept which reflects the new reality. The fact that live events and activities will be heavily constrained and the project will be far more reliant on digital communication and the virtual world than could have originally been envisaged.

A further challenge is that of community engagement. The initial launch video is focussed on a youthful Coventry. There is an immense challenge in trying to make the initiative relevant to all age groups and to the vastly diverse ethnic and cultural mix of the city. Looking at some of the material produced by Hull, the UK’s previous City of Culture, one telling comment was that often, people who have recently moved to a city are more appreciative of what the city has to offer than those who have always lived there. In Coventry’s case, in-commers have decided to locate in Coventry for a specific reason. There will be an “attractor” that has brought them here. Whereas those of us who have lived in the city all of our lives tend to take things for granted and are blasé about what the city has to offer. This in itself is a problem for City of Culture to address. How do they engage with those who are not amongst the usual suspects in the city’s cultural life and are cynical and sceptical about what City of Culture means. These are the people who need to be convinced that there’s something in City of Culture for them and who need to be supported in becoming involved.

The City of Culture team are not going to have an easy ride in the coming months. Whatever plans they had in place will have to reflect the ever-changing Coronavirus situation, however this is a good start with a punchy video, a strong brand and a strong team structured to deliver.