“I came across this interesting 1961 photograph of the plaster cast of the Jacob Epstein statue of St. Michael and the Devil suspended above Waverley Market, Edinburgh Old Town. I am not sure if any of our Coventry Society members know it full story?

“This photo of the statue suspended over the entrance to Waverley Market was taken in 1961 from Waverley Bridge looking towards Forsyth’s store (now Topshop) in Princes Street. The statue was created by the American-born modern British sculptor, Jacob Epstein to be displayed on the wall of the newly-built Coventry Cathedral. A Memorial Exhibition to Jacob Epstein (1880-1959) was held in Waverley Market in Edinburgh during the 1961 Edinburgh Festival. 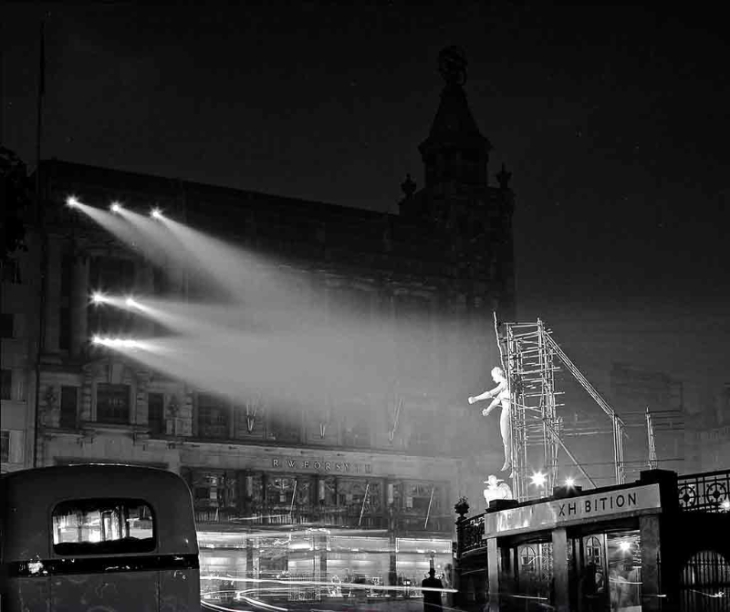 “A local Edinburgh person recalls his visit – ‘The Epstein Exhibition was probably one of the most successful events ever in the lifetime of The Festival. Myself and some of my friends, not arty types in the slightest, were so impressed we went twice. On one of the times we saw Albert Finney who was appearing, if I remember rightly, at The Assembly Hall’

“The Waverley Market was originally a market for animals etc. but over the years it became a covered area for other attractions like fairs and concerts with a garden on top around the skylights. I wonder if the fact that Sir Basil Spence had his offices and came from Edinburgh had any influence. Especially it being only a year until the Coventry Cathedral was to be opened he may have even had an hand in organising the exhibition?

“Allan Dodds, of Nottingham, in March 10th, 2010 said – ‘I’ve just conducted some research into the Epstein exhibition and learned that Campbell Harper Films Ltd produced a documentary of it. The Commentator was Tom Fleming whom I met at a ceilidh in Edinburgh. I still have his autograph.’

“The St. Michael and the devil statue must have been a plaster cast as the finished bronze statue weighs four tons and the figure of St. Michael is approximately 6 metres tall and simple scaffolding like this would not be strong for such a weight. Sir Jacob Epstein died on 21 August 1959 (aged 78) at 18 Hyde Park Gate, Kensington, London. The statue constitutes a powerful symbol of the triumphant resurrection of the Cathedral despite the powers of evil and destruction. It was unveiled on the Cathedral in 1961 by Epstein’s widow, Kathleen Esther Garman, Lady Epstein (married 1955-59).”