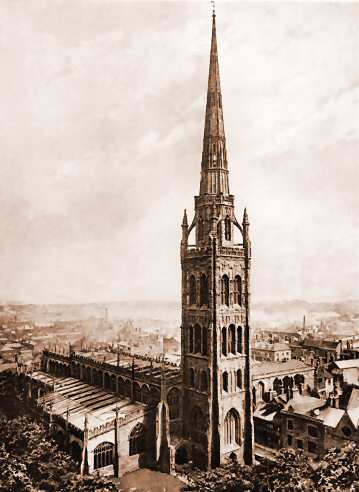 The first public use of electrical lighting in Coventry was at St Michael’s Church. In 1863 the steeple of St Michael’s Church was illuminated to mark the wedding in St George’s Chapel, Windsor on 10th March of Albert, Prince of Wales (later to be King Edward VII) to Princess Alexandra of Denmark. 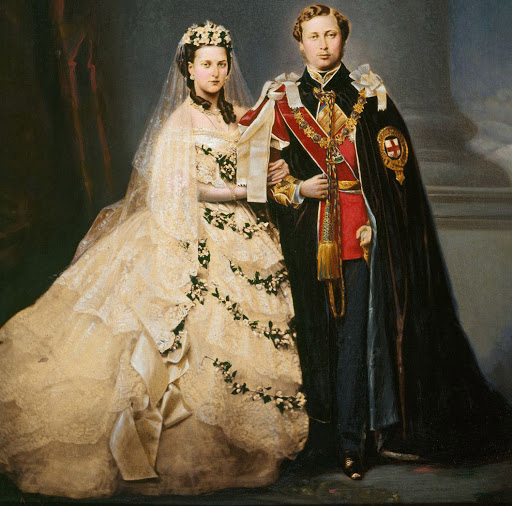 To prepare the lights for the occasion the well-known Coventry steeplejack, George Frith (“Steeple Jack” as he was known), climbed to the top of the spire where he spent most of the day. Coming from the celebrations taking place on the ground far below him, George’s meals were sent up the tower by his helpers – his main meal being a prime cut from the ox being roasted in the Bull Ring.

If he had not been so occupied with the lights, George would have been justifiably annoyed at missing out on the sheep roast and ox roast in Coventry’s market square. Throughout the city there was an air of excitement. It was a general holiday and a procession through the streets attracted most Coventry citizens in to the city centre.

This was in the early days of electricity but it appears to me that the local newspaper reporters present were not totally impressed by St Michael’s illuminations. “The real wonder was to see a light at all, on the top of such a building, three hundred feet above the ground, and to know that a man was there attending to it. “(Coventry Standard). Nevertheless, the lights did shine out from St Michael’s spire and they were visible from miles around.

How was it done? A battery was hauled up to the battlements of the tower and from there two cables carried the electricity to the top of the spire. Illumination came from charcoal jets placed in front of polished reflectors. These needed constant attention to prevent them from going out. The lights stayed on until midnight, and George Frith stayed aloft throughout that time.

“We cannot but think that this illumination of the venerable weathercock at intervals, from eight o’clock till twelve at night, was a remarkable portion of our celebration” (Coventry Standard)

The lighting had a marked impact because it was the first time in their lives that most Coventry citizens had seen electric lights. It was another thirty years later in 1895 that the city opened its first power station, which made electricity for lighting more readily available. (Remains of that power station can be seen alongside Coventry Canal off Foleshill Road where the Electric Wharf housing development is built.)

The impact was all the greater because the city was just emerging from one of the most serious trade depressions in its history. Across the city weaving looms stood idle. To escape the poverty, groups of unemployed weavers were emigrating with their families to Australia.

The City Corporation presented their Royal Highnesses with an address woven on broad Coventry ribbon as a demonstration of the skills of its workforce. Then as the date drew nearer the ribbon industry was unexpectedly revived.

A local clergymen wrote to “The Times” suggesting that the wedding be celebrated by wearing a Coventry ribbon rosette. The rosette would demonstrate loyalty and send good wishes to the Royal couple, and at the same time it would help the struggling weavers. This idea took root. Some enterprising fellow incorporated the Prince of Wales feathers in the ribbon design and covered buttons with it at the centre of a rosette. Cash’s was just one manufacturer that ran looms day and night for the 6 weeks before the wedding to meet the demands from schools, clubs, companies, churches and institutions throughout the country. 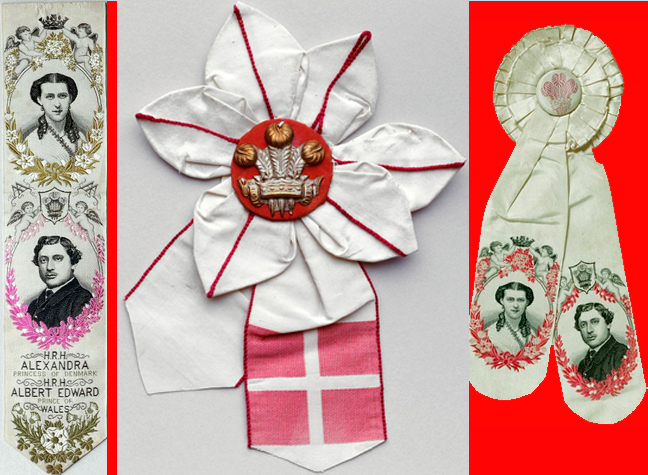 Many thousands of Coventry’s factory workers were exhausted by their last minute exertions at work. But as they looked skywards on the day of the Royal Wedding and marvelled at St Michael’s steeple with its many lights, at long last they had money in their pockets.

They now had good cause to celebrate!

This article is published with grateful thanks to Martin R Williams, Chairman of the Friends of Coventry Cathedral. It was published in the June edition of their E newsletter.

One thought on “St Michael’s lights the way”