Richard Sadler was probably Coventry’s pre-eminent post-war photographer, capturing life in and around the city for sixty years. Born in Hillfields in 1927, he spent much of his youth unwell, spending time in infirmaries and convalescent homes in the nearby countryside.

His photographic career started in 1948 with training at the Edward Eaves Studio in Leamington but Richard soon left to make his own way. He continued documenting the life of a city devastated by war, including a series following his Victorian grandmother, Minnie Sadler, as she goes about her day in 1951, which he exhibited in Coventry in 2015.

His early success came as a commercial photographer, hired by major businesses in the city, including Wimpey, Jaguar, Courtaulds and the Belgrade Theatre, for whom he photographed for forty years. He was also the photographer for the Royal Shakespeare Company for many years and the official photographer for Coventry Cathedral. His most famous image came in Coventry – a photograph of Arthur Fellig, also known as WeeGee – taken outside of Owen Owen (now Primark) when WeeGee was touring England to promote Zenith cameras. He also took Ken Dodd for fish and chips, producing another celebrated image of the Diddyman.

The 1950s and 1960s were an intense period for Richard – busy as a commercial photographer but also as an aspiring social documentarist and artist. As part of John Wiles’s ‘Never Had it So Good’, a play written by Wiles in Coventry and performed at the Belgrade Theatre, about poverty persisting amidst the post war economic boom. Sadler followed Wiles across the city, photographing the playwright as he researched, capturing the boom era in the newly-minted precinct as well as areas still awaiting redevelopment in Hillfields and Spon End. This work foreshadowed the later photography of Nick Hedges and the film making of Ken Loach as a way of tackling political issues through imagery and inspired his life-long friendship with another Coventry photographer John Blakemore. 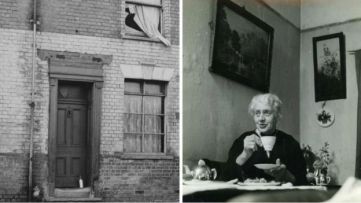 During the 1970s and the 1980s Richard continued to capture Coventry life, including a series about life in Earlsdon and a focus on the CND movement in Coventry. He also supported a new Coventry photography collective called Positive Images, which included Alan Sprung and John Wiley, in the late 1980s. His association with Derby University, began in 1967, with Sadler eventually becoming Course Director for BA Photography, a post he held until retirement in 1992. His solo exhibition at the University in 1992 attracted a great deal of attention and praise.

He retired to Monmouth on the Welsh borders but in 2015 returned to Coventry to exhibit his early Hillfields photography, along with John Blakemore, Masterji and Jason Scott Tilley as part of Imagine Hillfields.

“I first know Richard Sadler in 1966 when I was a very young art student of 16 and he was a our photographic tutor on Friday afternoons. He was working freelance and taught us how to develop film in the dark room, making prints, etc. But one of the best things was he would give us each a twin reflex camera and tell us to go around the city photographing the new buildings and the people using them.

“Another great thing was he took us to see his studio in Stoneleigh Terrace. It was on the 1st floor in one of the old grand Victorian houses designed by James Murray – sadly a few years late it was demolished to make way for the Ring Road.

“The main thing that impressed us all was how ‘cool’ he was – smart, good looking, a sexy job and he had the power to get people to relax and do things that he suggested. He would know exactly when to take that photograph that would tell a thousand words.

“Later on I got to re-know him when I was working at the Transport Museum and he was wondering if the Museum would like to buy some of his photographs of the various manufacturers around the city. Some of his famous photographs include The Goons, Ken Dodd, plus the famous Chicago photographer ‘Weegee’ and many others who are all included in his enormous archive that spans more than sixty years. Interestingly he photographed Ron Morgan the founder of the Coventry Society in his Toy Museum.

“He was a wonderful man and we will miss him a lot.”