In his talk to the Coventry Society in February 2020, architect Aidan Ridyard, focused our attention on St. Nicholas Church in Radford. It is an interesting example of post-war Church building in the city and has been referred to by Pevsner and in the book “Sixty Postwar Churches” published by the Incorporated Church Building Society.

The Church was designed by Lavender, Twentyman and Percy and was completed between 1955-57. The building was locally listed in 1992. The description below is taken from the Coventry Historic Environment Record.

The previous church of St. Nicholas was of red sandstone, designed in 1874 in the Early English style by G. Taylor of Coventry. It stood on a site further to the north of the churchyard and was destroyed by bombing during the blitz on 14th November 1940.

A landmine, a large metal box suspended by a parachute, descended slowly and silently, exploding above ground with a deafening roar, flattening the church. Just one course of stones was left standing.

The new church was built close to the site during 1955-57. The brief for the new church was to accommodate 436, including a choir of 48 with a Lady Chapel to seat 54. The design brief called for an unobstructed view of the alter for all the congregation and so the choir was made the same width as the nave.

The commission was awarded to Lavender, Twentyman and Percy with R.H. Fellows as executant architect. The foundation stone was laid in 1953 and building work continued over the period 1954-5. The church was built for a sum of almost £31,000. 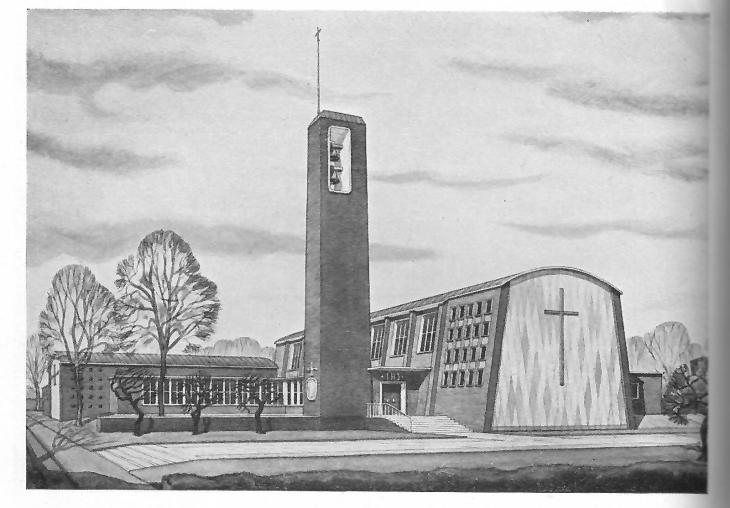 A church hall connected to the south of the building was planned from the start, but erected at a slightly later date. Its proposed stage and dressing rooms were never built.

The orientation of the church is north-east to south-west, with ritual east being south-west. Ritual compass directions are used throughout this description. The building is constructed around rigid, reinforced concrete portal frames with splayed legs. These are set at intervals of 12ft and give the building the appearance of an aircraft hangar, as Pevsner noted.

The walls are of concrete membrane, faced externally with buff yellow brick, which divides the structure into bays and gives the impression of buttresses. The frames also support the curved roof of shell concrete which is covered externally with copper sheeting. Flat roofs above the north aisle and vestibule/narthex have been re-clad with corrugated metal roofs.

Other materials used included Westmorland green slate panels and window surrounds to the exterior of the chancel and around the eastern entrance, and Doulting stone cladding attached with bronze clamps to the ritual east end. Cast stone was used for the window surrounds on the nave and other dressings.

The plan consists of a nave and choir with chancel, all set under one continuous roof. The north aisle has a baptistery to its western end including the sandstone font set from the former church, and a Lady Chapel with altar to the east. The equivalent space to the south is screened off from the nave and forms a long vestibule which connects the entrance lobby and the bell tower, which are both set at its east end, to the church hall as well as to lavatories and a kitchen at its western end.

To the north-east of the church is a projecting wing which contains three separate vestries for the choir, servers and clergy as well as a lavatory.

The eastern gable end of the building has inscribed diamond patterns and a large cross to the upper body of Doulting stone. To the left of this is the entrance lobby, approached by a flight of steps and with ribbed wooden doors set in a flared surround of cast stone against a background walling of green slate.

To left again is the tower, which has a tapered outline and a copper cap. The tower contains the flue from the boiler room and two bells set in a rectangular opening with rounded corners. To its lower body on the west side are steps leading to the basement boiler room and on the south side, below a stone cross, is a carved stone plaque showing St. Nicholas calming the storm. 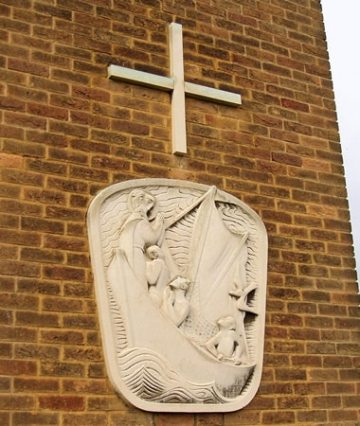 The western end has double doors with a cast stone surround, but otherwise the walling is of buff bricks laid in Sussex bond with a cross of raised bricks to the top. To either side are dressings of cast stone which mark the juncture with the tumbled brick to the flanking walls of the nave. The north and south sides of the nave are abutted to their lower bodies by the north aisle and narthex. These both have plinths of buff bricks but panels of red brickwork above replacing the original full-height glazing with two-light casements of safety glass. Above these are set the seven bays of the nave clerestory windows, each of three over two large panes. The western-most bay is blank. To each side of the chancel is a grid of windows formed of five bays set at four levels and divided by brick mullions and Westmorland slate transoms.

Although the nave and chancel are externally of the same width they are differentiated internally by a concrete vault to the chancel, set with rows of recessed lights to either side and a very slight thickening of the walls. The concrete of the walls and frame is softened by the extensive use of wood to the interior. This includes block flooring throughout the building.

The tunnel vault of the nave is lined with strips of African Walnut and the east wall of the chancel is panelled in block board veneered in Walnut overlaid with raised diamond-shaped panels in grey Sycamore. The cross to the upper body of the wall is of solid walnut. Wooden screens are set behind the font on the west wall of the north aisle and to the west end of the vestibule. These are ribbed, as is the pulpit which is set on a concrete base and has projecting fins to its circular body.

The choir stalls, alter rails and organ console are all original, purpose-designed for the church and also of wood. The octagonal font, salvaged from the Victorian church, is of sandstone with recessed panels to the bowl and has a new cover, made in the 1950s, of mahogany, sycamore and brass.

The distinctive light fittings along both sides of the nave were adapted, according to the Architects’ Journal of 1957, which says ‘the architect selected a standard fitting to which was added a polished copper tube to form a cantilever arm to house the wiring, whilst additional support was considered necessary and provided by piano wire stretched from the fitting to a fixing on the ceiling above. The bowl of the fitting is of a highly-polished and lacquered copper with translucent glass cut-out set within its base’.

The Church is currently vacant and boarded up and the congregation use the adjoining Church Hall for worship. It is said that the building is suffering from “concrete cancer”, the damage possibly due to the sloping walls being constantly wet from rain. Coventry Diocese has recently given the go-ahead for demolition.

The Coventry Society is disappointed to hear of the demolition of another important post-war building in the city. However we understand the pressure to do this, considering the cost of repairing it. We wonder whether retaining the tower might be a suitable compromise.

We would welcome your views on this.

2 thoughts on “St. Nicholas Church, Radford – soon to be demolished!”