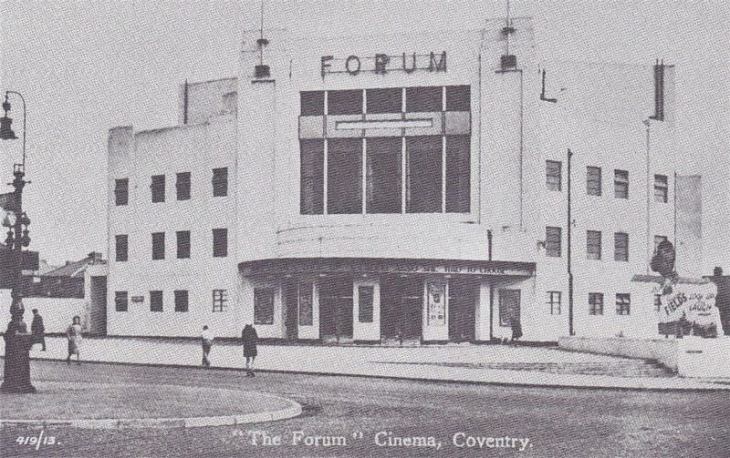 The Forum Cinema, on Walsgrave Road, closed and was demolished in 1962. Its Conacher organ was sold to the then Northampton Grammar School for Boys. Amazingly most of the organ has survived, despite a fairly rocky progression through the years. It is now in the care of the East Midlands Cinema Organ Association.

The organ was built in 1934 by the Peter Conacher firm of Huddersfield. It was a custom model as opposed to their four “Standard” instruments that a cinema chain could buy. This unusually was a standard practice at the time. Various firms would offer standard installations and only the big chains such as Odeon and Gaumont would pick those. Seemingly all the smaller cinemas went for off menu options!

The organ has three manuals, comprising of 8 ranks of pipes. Originally it had a wooden art deco surround and piano attachment that was playable from the organ console. The console was designed by noted organist Reginald Foort. It played in the Forum from 1934 until the demolition of the cinema in 1962, with a brief amount of down time in between when the chambers suffered extensive flooding. 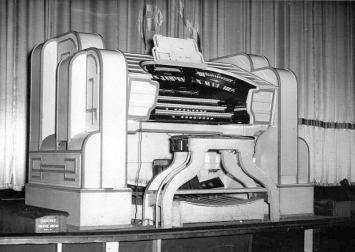 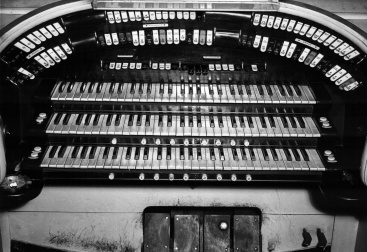 In 1962, it was decided that the cinema was to close, and be demolished. At this time a number of cinemas were either closing doors, or converting to Cinema Scope and having their organs removed. The Northampton School for Boys was in the middle of constructing their new school hall, and their Head of Music being a fellow of the Royal College of Organists, wanted an instrument for the new hall.

They were tipped off to a number of instruments in the Coventry area being up for grabs. The Conacher wasn’t their first choice, and they were first headed to the Gaumont. Upon arrival they were told, allegedly rather rudely, that the organ had been bought earlier that day by a church, and to leave the premises! Fortunately, the chap who tipped them off as to the Gaumont, had also heard that the Forum was to close and wanted to get rid of the Conacher, so over they went, found the organ to be a very fine example by a lesser known builder, made an offer and within a few weeks, were in removing the instrument in between film shows.

Upon removal to the school, it was sadly decided that the art deco surround was not in keeping with the new 1960s school hall, and was sadly left in the cinema to face the wrecking ball. The bench was also lost at this time. The console was unsympathetically “modernised” and clad with horrendous 1960s wood effect formica. However the important thing was that the organ itself was safe.

The organ suffered from poor installation at the school from day one, both due to the fact it was just “chucked” in as found in the cinema without any thought given to restoration. It was installed into chambers that were unsuitable, with a glass roof that was open to the heat of the sun all day, meaning that tuning was not something that could be accomplished on the instrument.

In the early 2000s, it was decided after 20 years of silence, the organ was to be removed from the school hall and sold on. This is when Roger Greenstead of Browns Organ Builders of Canterbury came into the story and purchased the instrument from the school. At this time, both the original piano, and the cathedral chimes were retained by the school to form part of the music department. Unfortunately since then the piano has been destroyed and no one knows the fate of the chimes.

In 2018 Carl Heslop was sub contracted by Roger Greenstead to carry out some of his tuning work in the London area (Carl being a full time organ builder also). Carl says “Knowing my interest in cinema organs, Roger told me of the Conacher. Over the next two weeks I went to view the instrument and decided although in a bad way, it was very important to save it.” This was due to the fact that of the original 9 instruments built by the Conacher firm, this was one of only three that were left intact.

“I spent the next few weekends trailing to Canterbury to pick up the organ, and bring it back to the midlands, putting it into storage in Melton Mowbray.”

The organ is currently undergoing a full program of restoration, including the console being fully stripped down and repainted. Sadly the original sides were lost as mentioned earlier, so the organ is to remain a plain console painted steinway black, as is rather popular with some organ consoles.

It is expected that the refurbishment will take two years and the organ will then be re-installed in the ‘New Forum’ near Melton Mowbray. It had been hoped to find a suitable venue for the organ in Coventry, but unfortunately nowhere suitable could be found.

Refurbishment will probably take two years. The Association aim to present it musically and also make it available for private practise and tuition.