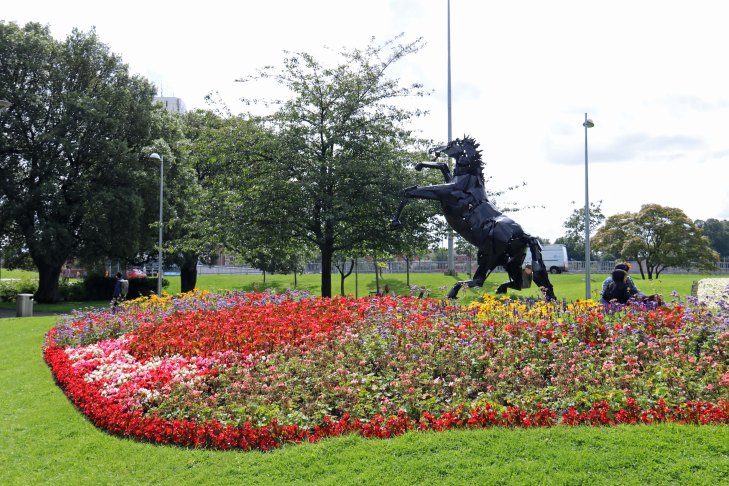 On Greyfriar’s Green there is a black painted metal horse sculpture. Its creator, Simon Evans, was an Art student at the Coventry Art College in 1985/86. He was working on a sculpture of Alexander the Great’s horse ‘Bucephalus’ , a legendary beautiful black horse which stood taller than normal steeds but was considered too wild and unmanageable, rearing up against anyone who came near him. Alexander was the only one able to ride him.

Simon’s sculpture was made from bits of steel plate, off cuts and scrap pieces. Using their unusual shapes he welded them together to create a rearing horse a bit like the Ferrari prancing horse. It stands at 4 metres high and 4 metres wide and is painted black.

While he was working on the sculpture in the Art College his tutor Dr. Tim Threelfall heard that the City Council were having a competition for Coventry students of all ages to make a work of art to mark ‘Industry Year 1986’. He felt that the steel horse would fit in well with the competition. The horse was a winner along with three other sculptures.

Each were to receive the prize of a £25 book token. This did not go down very well as the horse had cost £600 to make. An agreement was made and the Steel Horse was displayed on a brick plinth on the roundabout on the Ring Road opposite the railway station. This was quite apt as the native Americans called early trains ‘iron horses’ and cars were known as ‘steel horses’.

The City Council have the sculpture listed in their acquisition records as being called the ‘Steel Horse’ as has the book ‘Public sculpture of Warwickshire, Coventry & Solihull by George T. Noszlopy.

In 1998 it had to have some restoration as people had been climbing on it and bits had been knocked off. It was then painted in anti-vandal paint and had a Do Not Climb plaque attached.

Recently when the horse was removed the local press said “A steel plate horse sculpture which has been restored to its former glory has been officially unveiled at its new home in Coventry. The 12 ft tall public piece of artwork of a black horse once ridden by Alexander the Great was located at the island at Greyfriars Green from 1985 until work began to change junction 6 of the Ring Road.

“Trigger has been lovingly restored by specialist fabricator and installer of metal sculpture and artwork, Andrew Langley, from Art Fabrications in Fenny Drayton, Nuneaton. Andrew was a close friend of Simon Evans, who sadly died in 2010.”

I am sure Simon Evans’s wish was the horse to be known as Bucephalus which symbolises strength and hope. Like Coventry, it resolutely rears up to face all challenges ahead.