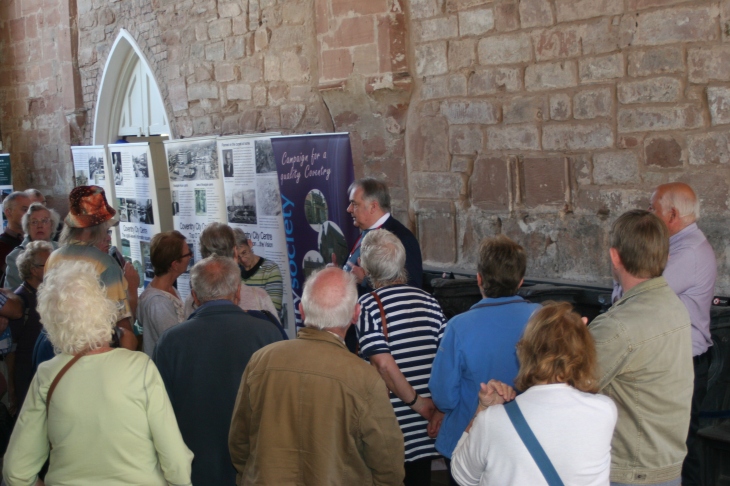 As usual the Coventry Society was actively involved with this year’s Heritage Open Days. The Society had a stand at the Old Grammar School and Paul Maddocks, Chair of the society, took people around the Burges and Hales Street area, explaining the plans for the new redevelopment of the area including opening up the River Sherbourne and land in Palmer Lane.

The Historic Coventry Trust are leading the regeneration of Hales Street, the Burges and Palmer Lane as a demonstrator for Historic England’s national High Streets Heritage Action Zone Programme.

The Trust is an energetic charity formed to acquire, restore and reuse Coventry’s heritage buildings, and the Coventry Society has been involved right from the start.

The people on the tour enjoyed exploring this forgotten area of the city: it has a fascinating history, intriguing buildings and great businesses.

The Burges was a principal road running south towards Coventry’s city centre, close to the historic market place at the intersection of Cross Cheaping and Broadgate. The name Burges probably derives from “Between the Bridges”, a name first documented in 1223.

Historically, the bridges were located at either end of the street; one crossing the Radford Brook to the north, and the second to the south over the River Sherbourne. The area was known as St John’s Bridge from the early 1300s, and from the 1860s as the Burges.

The use of the name Cross Cheaping is documented from about 1280; prior to this the area was referred to as the market place. Historic maps suggest that the buildings were laid out in characteristic medieval ‘burgage plots’; with shops and houses fronting onto the market place and narrow strips of land behind containing outbuildings and gardens. Documents suggest that Palmer Lane existed as early as 1225, today it contains the only visible stretch of the now culverted River Sherbourne.

The medieval streetscape of Coventry remained largely unchanged until the industrial expansion of the late 18th and 19th centuries.

The long medieval burgage plots were filled in with smaller court dwellings. In 1794 the façades of the eastern side of the Burges were rebuilt, although the older building fabric is thought to have been retained behind. The library wing of the Old Grammar School was demolished when the Burges was widened in 1794 and its gardens were lost when Hales Street was constructed in in 1848. 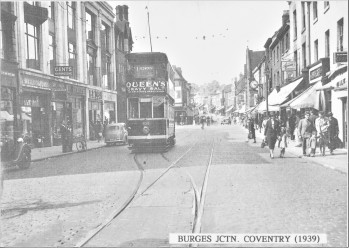 Extensive redevelopment in the 1930s saw the demolition of the western side of the Burges, as well as the medieval timber framed buildings along Butcher Row. The 1941 air raids damaged façades and roofs along the Burges and Cross Cheaping as well as the Old Grammar School. The area was redeveloped and repaired between 1948 and 1954 with financial support from the government.

We hope everyone enjoyed exploring this forgotten area of historic Coventry.
Copies of the Self-guided tour leaflet can be picked up from the Tourist Information Centre in the Herbert Art Gallery and Museum. 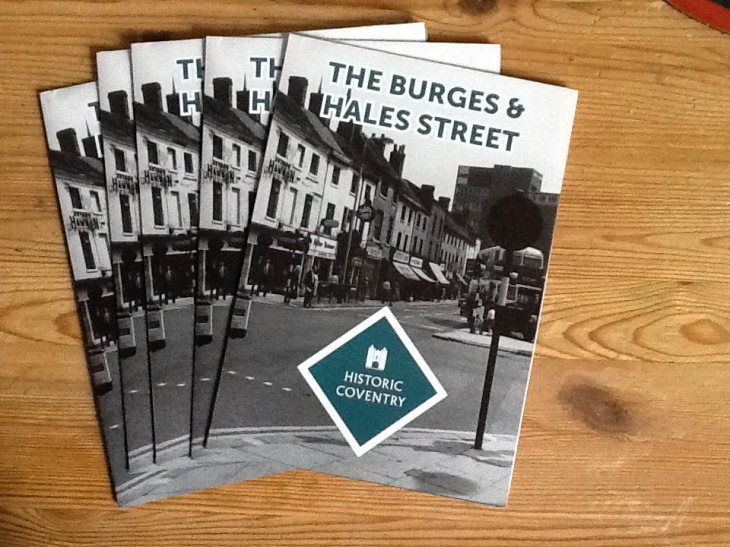