A book about the UK’s  “Town Halls” is to be launched in Coventry at an event on Friday 21st June 2019. The book is  written by Dawn Reeves, Chris West and Fran Collingham and features two chapters on Coventry – covering the Council House and the new Friargate House.

The launch event includes a guided tour of St. Mary’s Hall, the Armoury and Council Chamber and a talk by the authors, two of whom previously worked for the City Council. It takes place at the Herbert Gallery between 4.30 – 6.30 p.m. and costs £5 on the door.

‘Town Hall’ is a richly illustrated ‘coffee table’ book depicting town halls from the Medieval period to the modern office block style. The various architectural styles on show reflect the eras in which particular town halls were erected. The choice of locations is eclectic ranging from London boroughs to small Northern towns which nevertheless felt the need for prestigious edifices.

Each set of pictures is accompanied by text either describing the buildings’ architects, their architectural styles and how they reflect the times in which they were built and, where relevant, their adaptation for new uses (hotels, apartments, entertainment/social venues) or very often, written pieces inspired by the buildings though not necessarily about them. The texts related more directly to the buildings themselves are more successful in giving a focus for the illustrations. 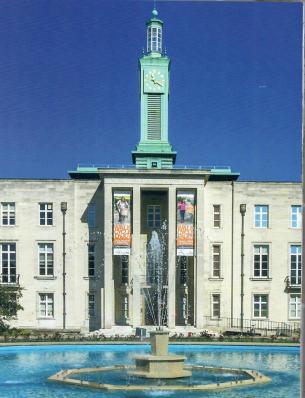 The book is split into four sections, Purpose, People, Power and Future. This does not completely work as all the buildings were there to serve a purpose and in some way reflect the power of the authority, its political class and people. Perhaps a more historical approach would have served the book better (pre C20th, early C20th, late C20th and the new century). The pictures lack captions so in many cases it is unclear which aspects of the particular buildings are depicted (Sutton Coldfield and Bethnall Green are examples).

One section that did catch the attention was the focus on Dagenham Civic Centre. Now no longer serving as a political centre, it is owned by the ‘Coventry University Group’ and has been ‘lovingly restored to its classical Art Deco 1930’s style. What a pity the ‘Coventry University Group’ could not see its way to extending the same courtesy to its hometown civic centre.