Football fans may have heard of David Danskin, the founder of Arsenal Football Club. But did you know that he is buried in Coventry’s London Road Cemetery? It is perhaps not surprising that people don’t know because for 70 years the grave has been unmarked.

This was put right last week when a new headstone was dedicated at the Cemetery. CovSoc Chair, Paul Maddocks, attended the ceremony and writes:

“The installation of the headstone came about as a result of action by Ian Woolley, Chair of Friends of London Road Cemetery. Ian spotted that the Arsenal Scotland supports club had put up a blue plaque at the birth site of David Danskin. He got in touch with them to tell them about the grave, which did not have a headstone or any indication of who was buried there. ”

“As all Gooners should know, David Danskin was the man who is recognised as having been the man to lead a group of fifteen men, mostly Scottish engineering workers, who first formed a football team in Woolwich in October 1886 and he was also the first Captain of the club.

“In 2007, we at Arsenal Scotland Supporters Club arranged to have a blue plaque put up near where he born in the Fife Town of Burntisland. Our Honorary Club President and Arsenal legend Bob Wilson unveiled the plaque along with Danskin’s grandson Richard Wyatt.

‘Davie’ Danskin was just 22 when he moved from Kirkcaldy to work as a qualified mechanical fitter at the Royal Arsenal munitions factory in Woolwich, specifically as a bench fitter in the gun machining workshops in the Dial Square complex.

“Having played for Kirkcaldy Wanderers at Starks Park (where Raith Rovers play now) Davie had no problem finding enough workmates to form a new football team. There were many teams formed by the Armoury workforce but Danskin’s team became a permanent club that has lasted to this day.

“He captained the new team for the first game, played against Eastern Wanderers on the Isle of Dogs (where Tiller Road is now) on 11th December 1886, winning 6-0. If the team had a formal name at all it was probably ‘Dial Square’ where they were mostly all employed. Later on Christmas Day, after their morning shift, the team sat in the Royal Oak pub (where the Woolwich Arsenal DLR station sits now) and after some discussion and no doubt a few beers, named the new club ‘Royal Arsenal’.

“It is amazing to note that in just three years after being formed, Royal Arsenal won the London Senior Cup Final in front of 10,000 supporters and regularly played at The Manor Ground in front of 4,000 to 6,000 home supporters.

“Danskin was still involved in the club when they were renamed Woolwich Arsenal just as the club turned professional in 1891. After giving up playing in 1890 following a leg injury, Davie left the Armoury and started a nearby business building and selling bicycles from his own shop in Plumstead. He qualified as a referee in London. He later sold the business and moved to Coventry where his engineering skills were put to good use at the Standard Motor Company and the Maudsley Motor Company.

“He continued his love of ‘fitba’ in Coventry and was chairman of Stoke Albions FC. In 1936 he was admitted to hospital following an accident which aggravated his old footballing injury. He was told he may need to have the leg amputated, but firmly declined. From his hospital bed the matron allowed him to listen to the radio commentary when Arsenal beat Sheffield United 1-0 in the FA Cup Final at Wembley attended by 93,000 spectators. He spent the rest of his life in the Warwickshire area at Coventry, Kenilworth and at Warwick Hospital where he died in 1948 aged 85. He was buried in London Road Cemetery in Coventry.

“Local historians from Coventry, Lionel Bird and Ian Woolley were searching for the burial place of Willie Stanley who was the founder of the Singer Football Club (later Coventry City) and by chance found the burial plot of David Danskin. There was no headstone or any marker but the location was identified on the cemetery map and verified by the ‘Friends of London Road Cemetery. Lionel, also being a football fan recognised who David Danskin was and in September 2018 the story found its way to the Coventry Telegraph and in a matter of hours surfaced on Twitter. That’s when we spotted it. Having marked the spot where David Danskin was born, it just seemed that marking his resting place would complete the journey from the cradle to the grave.

“Why no grave marker? Well you need to consider that Danskin died just a few years after the Second World War, during which Coventry had suffered horrendous heavy bombing by the Luftwaffe. So as the good folk of Coventry had to rebuild their City, spending cash on headstones was not a priority for many families. As time passed, things were less important and eventually the headstone matter was forgotten. No drama, nothing sinister, just normal life.

“So, Arsenal Scotland Chairman Mike Buchanan, Club Secretary Caz Moir, Treasurer Alan Speed and the club committee agreed that we should arrange for a headstone.

“We made contact again with Danskin’s grandson Richard Wyatt in Canada and with Arsenal FC and we got approval to have a memorial designed for the Danskin family and by Arsenal to have the club badge engraved on the cover stone.

“On Monday 29th April 2019 The Sub Dean of Coventry Cathedral, the Reverend Canon David Stone led a short service in Coventry, to dedicate the new memorial to David Danskin and his family, in the presence of his descendant family, local friends from Coventry, Friends of London Road Cemetery, officials of Arsenal FC, Coventry City FC, Arsenal Scotland and several other Arsenal Supporters Club and Arsenal fans. 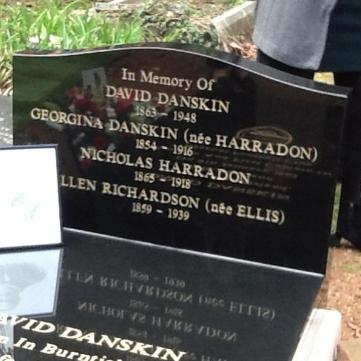 “What is very interesting is Davie Danskin’s grave has next to it and in front of it graves of men who were in the Royal Artillery and have the Regimental shields on them which feature a artillery gun, so he is surrounded by ‘Gunners’.

Location of the Grave: