The Coventry Society welcomes the news that work has started on the construction of the new Broad Street Community Meeting Hall in Foleshill.

Broad Street Meeting Hall is a multi-cultural facility for all communities in Foleshill. The organisation is led by Coventry Society member Alan Griffiths and has been operating for 18 years.

Last year the organisation was awarded the prestigious Queen’s Award for Voluntary Service, sometimes described as the equivalent of an MBE for voluntary organisations. The award was presented by the Deputy Lieutenant of the West Midlands, Mr Les Ratcliffe MBE, at an event hosted by the City Council in St. Mary’s Hall on 26th November.

On 19th February the diggers moved onto site and started the preparation work for the new building. The concrete base has now been laid in preparation for the metal framework. It is anticipated that work will be completed by Christmas. In the meantime activities continue in the adjoining building, which used to be occupied by Broad Street Windows.

The project is funded by a Big Lottery Grant of £1 million.

On Saturday 18th May there will be an Open Day at the site between 12 noon and 3pm. The event will include the “Laying of The Stone” for the new community hall. There will be tea, coffee and cake (and maybe a locally made samosa or two!) and fundraising towards the final 5% of the cost. 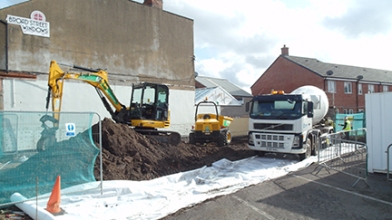